This reissue sounds better than an O.G, well worth picking up. - Fryer 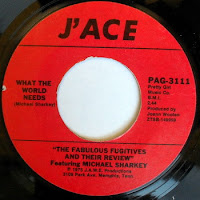 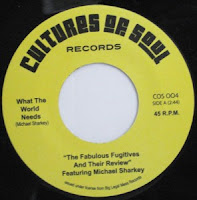 Fabulous Fugitives featuring Michael Sharkey is a rare doubler A sider containing two awesome deep funk cuts from this Memphis, Tennessee group. Originally it was released in 1973 on the J’Ace label owned by local gospel record label owner Style Wooten. The group only put out one 45 and the orginal masters have long since been destroyed as far as we know. The A side, “What the World Needs” is a politically charged funk bomb. The flip side, “You Made Me Cry” is a more straight forward funk track with plenty of fat drum fills.

Pick it up at and check the sound files out here
Posted by fryer at 14:15

All the post are nice to read it. nosolorunning

Thank you for this guidance.its really informative for all upampanama..

its really informative tutorial. Thank you for this tutorial islandersatschool

What a good suggestion posted by the peoples RohjuH


Nice post all information are useful to real life. webonduty

The information which you people are given are really superb mayinducphat..!!!

Most of them related to my blog. MooseNoose

Thank you for this guidance.its really informative for all.. oofeed

All the post are nice to read it ponteblue...


Need to implement in my blog. lu-cioles

Thanks for the comments which the peoples are give here biteb


Not only to read need to spreed every one.
forgrandma

The information which you people are given are really superb..!!! furano-shittococo