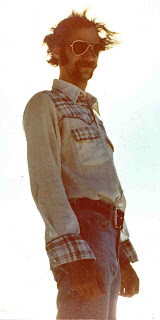 By Bill Mersey (writer of I've got it)

I don’t know for sure but I don’t think any individual 45 rpm record has ever commanded the price that “I’ve Got It” has in the past two or three years. And trust me, nobody is more surprised than I, the guy who wrote, arranged and essentially had more to do with its creation than anybody else that an old 45 could sell for in excess of $4000! So from its inception and to the best of my recollection, this is how the record came to be.

In the mid-70’s, I was a fledgling songwriter, producer, arranger and guitar player in New York City. And that meant that every day, I was in Midtown either writing - or hustling something I’d written to try and get that all-too-elusive hit record.

But I also wrote at home alone and one night composed a pop/r&b track, a guitar duet recorded by bouncing cassette tracks together. The next day I played it for Dorian (my co-writer on “I’ve Got It”) and we began. Writing with Dorian was a nightmare! He was a wild drunk with no work ethic - and I was a focused, ambitious, high-speed youth with goals. I wanted a hit record - and I wanted it yesterday. Half the time we ended up in wrestling matches mostly because I got so frustrated with his deliberate (euphemism for slow/slacker) pace.

I can’t remember sitting with Dorian to write “I’ve Got It,” but I do remember that I didn’t like the song and hadn’t the strength (emotionally) to fight Dorian about the lyrics. Somehow, we managed to piece together a skeleton of a presentation and no doubt moved on to something else the next - or even - that day.

Shortly thereafer while pounding the pavement, I found Art Polhemus, a studio owner with a hit record (“We Ain’t Got Nuthin’ Yet” by The Blues Magoos) who showed some interest in me as an artist! I thought he was crazy (I didn’t consider myself a singer/artist at all) but of course brought my friends in to cut some tracks free of charge.

But quickly, we both realized that the best tracks required a real r & b singer. So Art suggested that Willy Collins (a guy I didn’t know but who had worked with Art on a Bareback Record) would be the perfect vocalist for “Bumper To Bumper” and “I’ve Got It,” our two strongest tracks. And he brought in Carl Hall of Brodway fame to do the background vocals. Carl did a brilliant job composing and singing and made “I’ve Got It” come alive. Before that, I had no interest in the track. But when I heard his contribution, I knew he’d brought a dimension that just might overcome the weak lyrics. And so did Art. He actually hired ten philharmonic string players and told me to write a string chart (something I’d never done before). I didn’t exactly want to tell him I didn’t know how to write for strings, so I grabbed an ancient arranging textbook and did the best I could. “I’ve Got It” contains the first string chart I ever wrote!

Next came the flutes! “The Hustle” was a big hit at the time and I wanted to capture that lilting Pied Piper thing that made that record so popular. When finally mixed, the flutes can only be heard for thirty seconds in about minute 3 of the record. I wasn’t the producer and thus, I didn’t have much say as to how the mix would go.

In the meantime, “Bumper To Bumper” was shaping up as the A side - as “Shake” fell by the wayside while we concentrated on the two compositions we thought had the best chance in the marketplace. But all was not well within “the family.” Willie was fighting with Art. Whatever...we had tapes of the session and were playing the songs for whomever would listen.

I dropped the tape off at Mercury Records (unannounced) and miraculously, got a call from Steve Katz (original guitar player for Blood Sweat And Tears). He wanted to know who I was and how I could produce a record as good as “I’ve Got It” with no name or credits. I went to see him and whatever happened, Mercury passed.

Then Willy found his way to Jeff Lane, who had The BT Express and Brass Construction, and was really the guy who could have fast-laned us (no pun intended) to stardom. Jeff loved “Bumper To Bumper” but wanted to be the executive producer. Art, a control freak, turned the deal down knowing he couldn’t call the shots if he went with the program. Willy and I were NOT happy! Christmas was coming and we wanted our share of the money Jeff offered us ($6,000 in advance).

I told Art if he gave us the money that would have been our share of the six grand, I could understand his point of view. When he poo-poo’d me, I went broke for the Christmas of 1978 and understandably (at least in my mind) departed from Art. I called Willy to tell him the news: “We’re on our own. From now on when you play the tape, tell them the record has to be recut as we cannot deal with the original guy who fronted us the studio time.” Though Art had control of “I’ve Got It,” “Bumper To Bumper” had been previously recorded by the BT Express (though not released), and was hence out of his jurisdiction.

Next came Salsoul Records who loved “Bumper To Bumper” and had no problem with me recutting the track (Jeff Lane did. He didn’t want a similar rendition floating around and would not give us the six grand unless he got the master of the original recording). And so...I recut Bumper with all the same singers and players and actually made what I and most other people considered an improved version. Willy stayed on the track and the record came out, made a a little noise, and faded away ending the saga - or so I thought.

Fully four years after ”I’ve Got It” was recorded, I got a call from Art. Apparently, after all that time, he’d sold the master to some guy in Harlem and had $500 for me. I was flabbergasted. I hadn’t seen Art for almost four years and had virtually forgotten about “I’ve Got It.”

He handed me the money and a couple of Rojac “I’ve Got Its” and I was on my way to Harlem to meet the boys. The boys were an old man (Jack Taylor) and the singer “OC.” I didn’t have a lot of hope for the record. I could tell the entire label was a rag-tag vanity deal and that it would never see the light of day. And I was right. After a gig or two and some heartfelt neckbones and rice dinners, I was on to the next fantasy. Clearly, “I’ve Got It” wasn’t going to happen. It was time to move on.

Somehow, that Rojac Record of “I’ve Got It” made its way to a European distributor and against all odds became a cult classic. The fact that copies of the original Rojac pressing have sold for as much as $4806 is totally unbelievable. To think that I had 25 of them at one point.

I left the music business a long time ago bitter that “Cash Money,” (another record I made) and “Bumper To Bumper” never got the chance they deserved. To think that “I’ve Got It” is the record that garnered so much status totally mystifies me. But when I listen to it now, I recognize that the record sounds like it should have been a hit in its day, and for current fans of old time soul, represents an undiscovered period piece which the mainstream missed the first time around.

So a special thanks to the DJ’s and collectors who via their excellent taste in 70’s soul, have brought this long unrecognized work of art to r & b fans everywhere. Now go listen to “Cash Money” by Cholly Rock and The Avenue B Boogie Band. That’s really the best record I ever made.
Posted by fryer at 13:29